Natural Orifice Transluminal Endoscopic Surgery (NOTES) is an emerging field of minimally-invasive gastrointestinal procedures in which endoscopists—typically gastroenterologists or surgeons—use a natural orifice such as the mouth to access the space outside the gastrointestinal tract to perform interventions that traditionally required open surgery. The most successful and widely performed NOTES procedure is Peroral Endoscopic Myotomy (POEM). It is used to treat an esophageal motility disorder called achalasia. 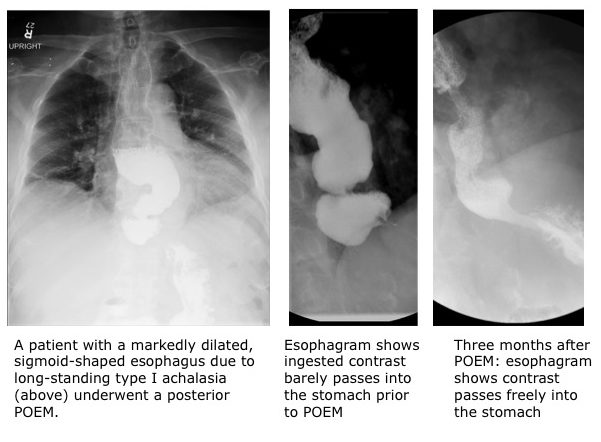 Achalasia is the result of idiopathic nerve damage that impairs the function and coordination of the muscular wall of the esophagus and impedes the lower esophageal sphincter from opening into the stomach. The result is an accumulation of food and liquid in the esophagus, which can cause a feeling of something being stuck in the chest, as well as chest pain after eating, regurgitation and even pneumonia. A progressive, incurable condition that occurs primarily in patients between the ages of 30 and 60, achalasia may eventually lead to severe swelling of the esophagus (a mega-esophagus), and often results in weight loss and malnutrition.

“POEM offers an ‘incision-less,’ minimally-invasive approach to treating dysphagia from achalasia, which is a serious medical problem that really impacts patients’ ability to eat and their quality of life,” says Andrew Wang, MD, a gastroenterologist and director of interventional endoscopy at UVA Health System.

During the POEM procedure, an endoscopist passes an endoscope through the mouth into the esophagus. A cut is made in the internal lining of the mid-esophagus. The scope is then passed through this incision and is used to make a tunnel in the wall of the esophagus using the submucosal space to give the endoscopist access to the circular deep muscle layer of the esophagus called the muscularis propria or MP. The circular muscle fibers above, at and below the esophageal sphincter are cut. This myotomy relieves the abnormal pressure caused by the poorly functioning sphincter and esophageal muscle and allows for the clear passage of food and liquid into the stomach. Once the endoscopic myotomy is complete, the mucosal entry site is closed using endoscopic clips. The technically complex maneuvers used during POEM (specifically submucosal tunneling) are an offshoot of those used for endoscopic submucosal dissection (ESD), which was first performed in Virginia at UVA in 2010. “We are one of only a few sites in the U.S. that has long-standing expertise in performing ESD to remove large luminal neoplasms and early cancers from the GI tract as an alternative to surgery,” says Wang. “POEM uses concepts and endoscopic techniques derived from ESD, so it was a natural progression for me to start performing POEM procedures at UVA.”

Like other minimally-invasive procedures, POEM offers faster recovery, shorter hospital stays, decreased pain and lower risk for infection. But unlike laparoscopic surgery, there are no external scars. Over the past decade, POEM has been proven to be a clinically successful therapeutic option for the treatment of patients with achalasia. “We started doing POEM in 2014 and have done 34 POEMs at UVA as of July, 2018,” says Wang. “Overall, we have seen very good clinical responses, and none of our patients thus far have had a serious complication.”

Not all patients are suitable candidates for POEM, so an accurate diagnosis is critical. At UVA Health System, patients experiencing dysphasia undergo a comprehensive evaluation and multiple diagnostic tests. An esophagram and/or esophageal manometry, in addition to a physical exam, can diagnose achalasia and rule out other conditions that cause dysphasia (such as cancer or neurological disorders). High-resolution esophageal manometry, which is offered at UVA, can also determine the specific subtype of achalasia, allowing doctors to choose the best treatment option for each individual patient.

Alternatives to POEM include:

The POEM procedure may be especially beneficial for patients diagnosed with type III achalasia, which is a variant that is more difficult to treat. Additionally, POEM can be done as a salvage procedure after Heller myotomy in those with a poor clinical response.

“Because the endoscope can just as easily operate on the anterior or posterior walls of the esophagus, POEM can also be used to treat patients who may have had a Heller myotomy with an incomplete clinical response,” says Wang. “Patients who have an incomplete response following POEM can elect to undergo POEM of the opposite esophageal wall. Also, the POEM procedure offers the possibility of a long esophageal myotomy to treat patients with type III achalasia and patients with other motility disorders such as diffuse esophageal spasm. This lengthy myotomy is not possible via laparoscopic Heller myotomy.”

Because of these advantages, POEM is now being recognized as a favorable treatment option for achalasia and other motility disorders. “We are getting increasingly more referrals for POEM from primary care physicians, gastroenterologists and thoracic surgeons from all across Virginia and nearby states,” says Wang.